If you’ve ever strolled down the Thames on a Saturday evening and spotted a crowd of people throwing their arms in the air, pint in hand, jumping around to a bombastic array of dance music, you might just have witnessed what Joy Anonymous once coined a ‘Joy Meeting’. It’s a refreshing sight for the typically murky shores of Southbank - a joyous, ever-growing community that builds with each turn of the tide.

Joy Anonymous is the lovechild of musicians Henry Counsell and Louis Curran, two 20-somethings hitting the scene at pace. The pair - who started up the project during the darkest days of the pandemic - have been jokingly (and fittingly) named the ‘pied pipers of lockdown’ with a project that takes impromptu sets filled with house, disco and soulful classics and MCs jumping on the mic ad hoc to the passing crowds of central London — and it’s irrefutably energetic. Since their earliest form as a Thameside phenomenon, both Henry and Louis have cemented themselves within the dance music world through global tours, heavyweight collaborations with the likes of Fred again.., The Blessed Madonna, Four Tet, and Skrillex, and a slew of party-starting tracks.

Originally, the duo launched the project off the back of AA meetings that Henry once attended in support of friends. “I was working with a few friends who were going through alcoholics and narcotics anonymous, we'd go to these meetings and see this amazing thing where people come and share their stories,” he tells Mixmag as he sits beside project partner Louis one morning. “There are people who have been in it for years, newcomers, people at all different stages. What they’re sharing is this incredible moment where you're like, ‘oh, this person who thought they were alone finally doesn't feel alone anymore’.” 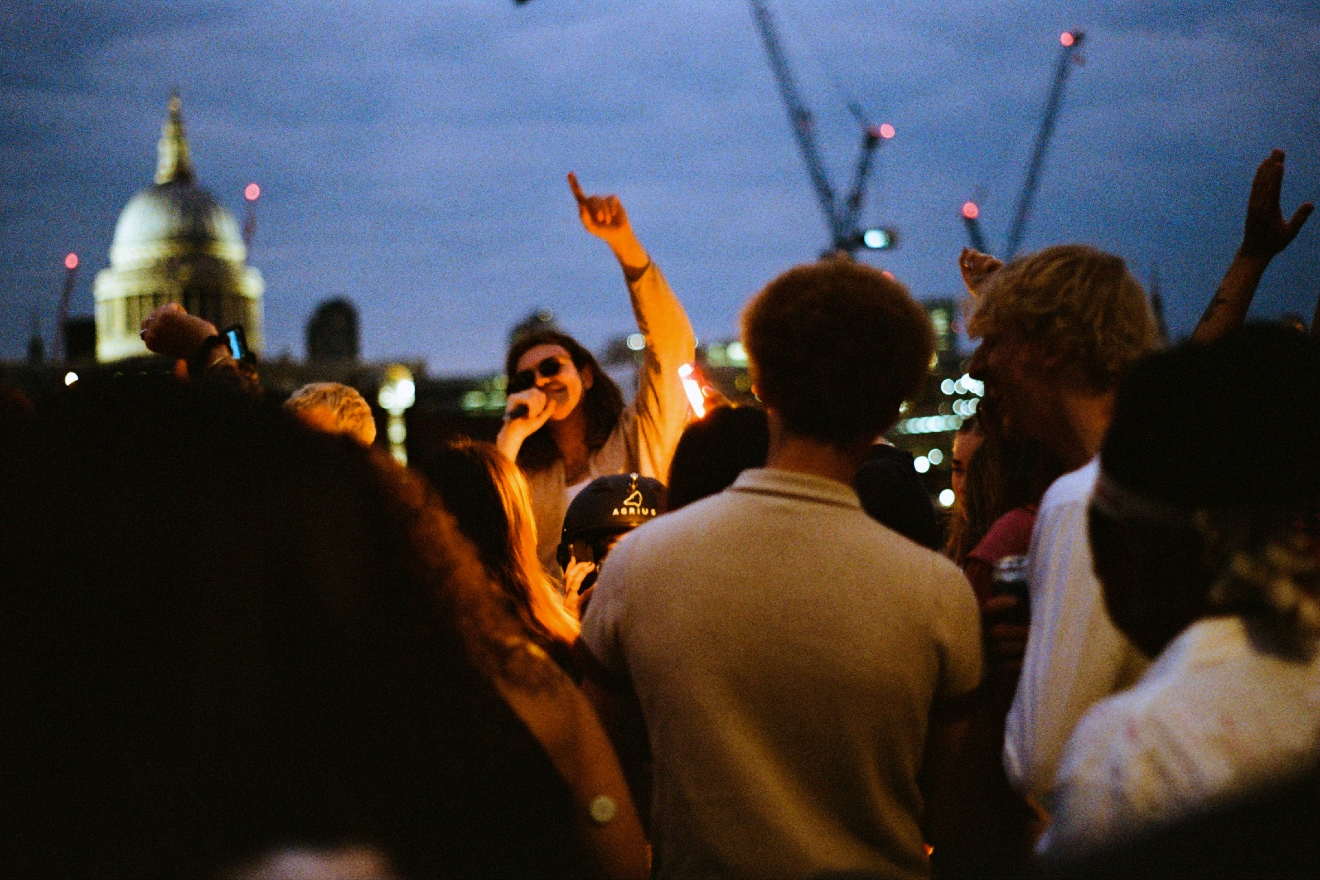 If not for that selfless act of support, Joy Anonymous wouldn’t exist in the capacity that it does today. “We originally had this band called Count Counsellor, we were gonna make this concept album called ‘Count C and the Joy Anonymous’. We got so into the idea of what Joy Anonymous could be,” Henry recounts. In its path to becoming a pop-up rave meet-up on the tides of Thames Beach, Count Counsell upended and become something entirely different. "We thought, what if you put joy at the corner of that?” Henry says. “A lot of people just don't understand what joy is or how to find it — and even believe that they can't find it.”

“We were initially going to do all these Joy shows at old people's homes, and we had a friend who was working in a prison reform program,” he explains. "Then lockdown happened and all of those ideas went out the window, we were a bit lost”. With plenty of music gear to boot, Louis toyed with the idea of outdoor shows — despite the issue of legality, there were no set laws prohibiting live music outdoors at the time. With a set of camping chairs in hand, the duo took to the shores with their only intention to bring some joy to passers by through such troubling times.

Word quickly spread, and, through mostly word of mouth, Joy Anonymous’ weekly meetings grew bigger and bigger building an inner circle of like-minded people. If you were in the know, you’d watch out for Henry and Louis’ signal to ‘keep your eye on the tides’ each week, meaning you could catch them in that same trusty spot when the tides were out. “We did it every day for a week at first, and by the Friday there were two or three hundred people in this stone circle,” says Henry. “People were coming and sharing their stories, and we still get messages to this day from people who came down to the first meetings telling us how it really helped them.”

Three years on, Joy Anonymous is nearing its 150th Joy Meeting - and they're more in vogue than ever. Now, the pair are seeing crowds bigger than ever before. “The Southbank meeting still has a similar feeling, but they've grown in numbers,” says Louis when he looks back at those early meetings. As the dance music outfit grew in popularity, they began producing - and with influence from everything they play out typically on the tides - you can expect to hear everything from vocal house to uplifting disco stylings in their recent work. Just last year, the duo released their debut album, ‘Human Again’, fronted by a photo of their crowd throwing up a hand symbol now recognised as that of Joy Anonymous’. 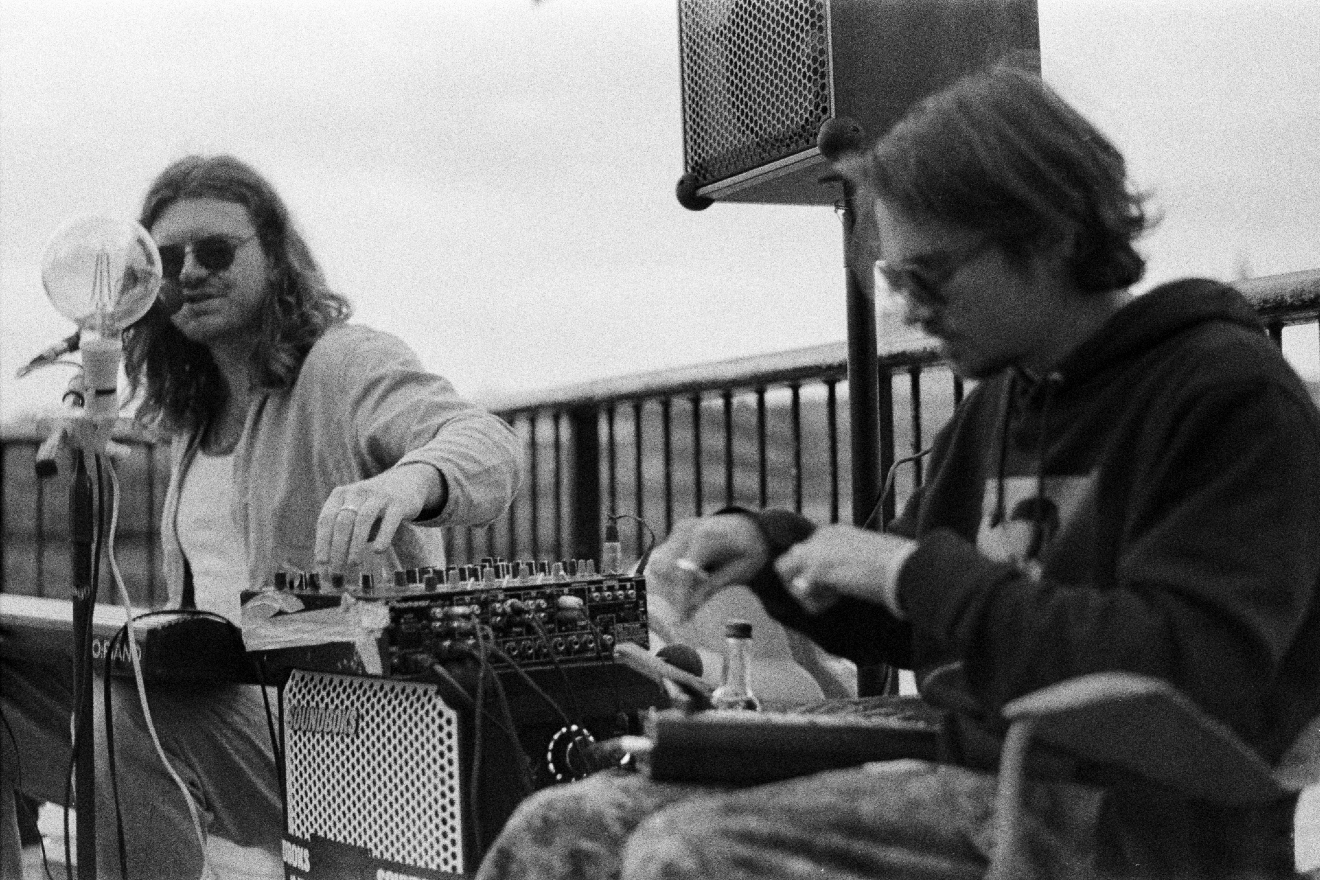 “Every feature on ‘Human Again’ is basically from someone down at the Southbank. FACESOUL, sbk, K4mo… loads,” says Henry. With a recent slew of newly released tracks, fans now suspect that another record could be on its way — and this time with influence from around the globe. “We want to keep it going, not get too comfortable. If we take it around the world, what kind of people could we get jumping on the mic in Finland, Turkey, wherever?” Louis contemplates. “We’re trying to take Joy Anonymous to other countries, other cities."

Recent tracks, including the garage-tinted ‘JOY (Love’s Not Real)’, was even promoted through Joy Anonymous’ notable word-of-mouth marketing. Putting the new single onto a handful of SD cards, the pair took the new track around London and planted them in unsuspecting places for strangers to pick up. "It all kind of stems from the way that Lou plays the samples down on the Southbank, it’s all on SD cards. We were like, right, let’s do our own version of white label culture,” Henry says. And that unusual marketing technique will continue, they say, to help bolster the Joy community in a natural way.

In their come-up, Joy Anonymous has seen its peak at festival season, being booked on a world tour with Fred again.., and now see hundreds of fans at their frequent Southbank shows. With plenty more on the horizon for the duo — and certainly more global sessions replicating that collaborative feeling on the Thames — Joy Anonymous reaffirm: “we always want to put people at the core of what we do”. In the next year, fans can expect plenty more SD cards from the pair, a potential second album, and many more joyous meetings on the tides.