It’s early September, summer is coming to a close, and good time seekers and festival fans alike are looking for one last send-off in the sun before the upcoming winter clubbing season starts. Lisbon's MEO Kalorama provides them with exactly what they need. Many attendees know this is the last summer event they can attend until mid-2023, so they show up in their masses with a jubilant atmosphere emanating from the ranks even before any music has begun.

Filled with many Lisbon locals, as well as a slew of people who have travelled across Portugal and from overseas, the friendly late-summer sun unites attendees by providing a beam of positivity, and it's not too hot to dance. The festival offers camping away from the main grounds, and there are numerous hotels close by with excellent access to public transportation for getting to and from the event. Like many other European festivals, the event starts later in the day and ends in the early hours of the morning - allowing those who have travelled to explore the beauty and cultural richness that Lisbon has to offer.

Located at the city's Bella Vista Park (which translates to “beautiful view”) - the site is a true spectacle, hidden away from the business of city life while being only a stone's throw away from Lisbon city centre. Revellers pour in through the gates and descend into an enclosed valley which has trees, hills, dips, and a clear view of the sky. This bowl-shaped arena gives you the impression that you are in the middle of a natural amphitheatre. The site is small and easy to navigate, featuring only three stages: the main MEO Stage in the dip, the smaller Futura stage tucked around the corner, and the medium Colina stage at the back. From several parts of the festival - each stage is visible and those wanting to take a break from the madness can opt to sit down and watch the various streams of movement from one stage to another. 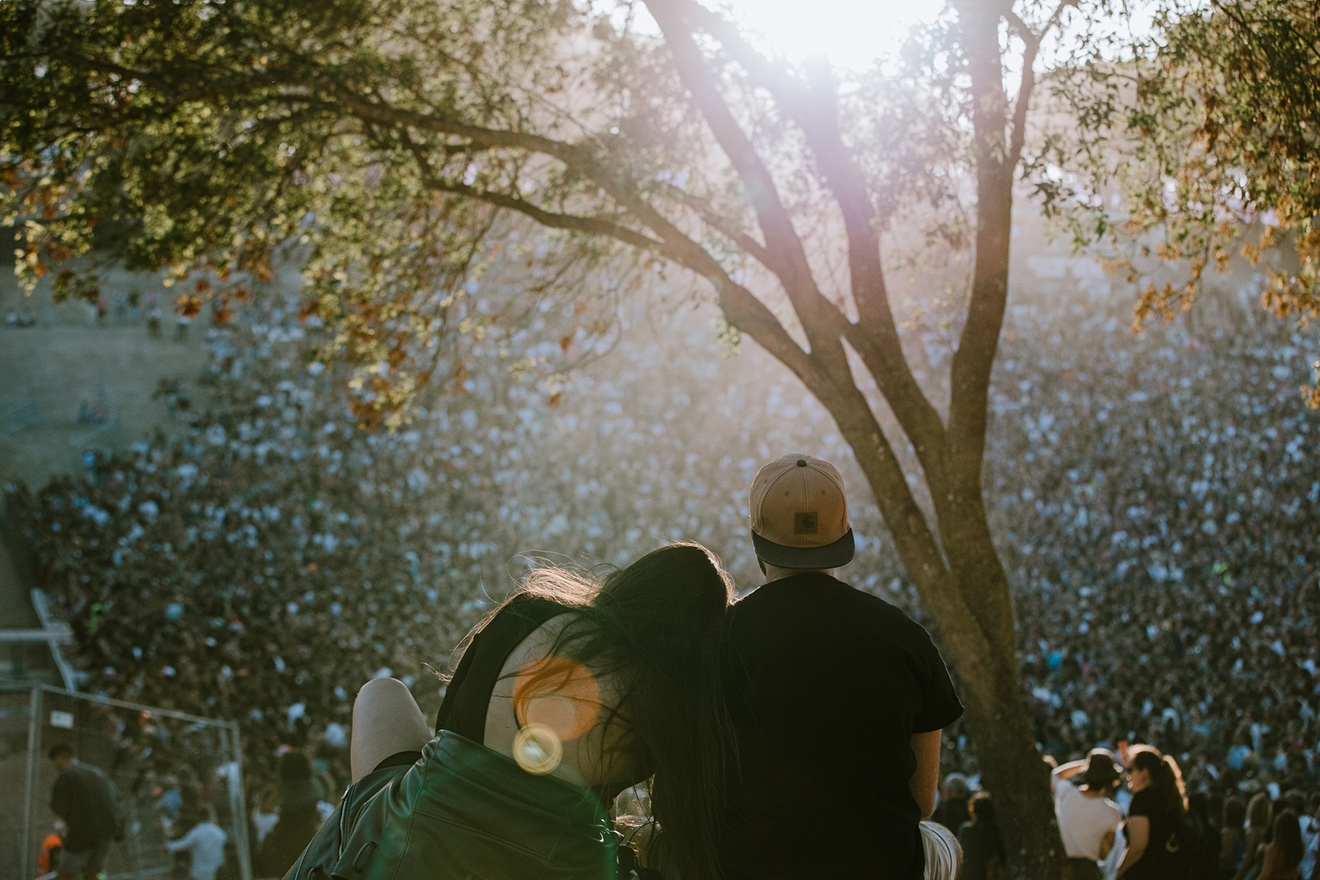 “I’m really excited to see these acts, there are so many people that I love!” chimes one Portuguese man. He has travelled up from Porto for the weekend to attend this festival and highlights headliners The Chemical Brothers as one of the acts he’s most excited to see. Despite being a news festival, MEO Kalorama has invited some of the biggest names around to play for the last big summer bash in Lisbon. For electronic music fans, this festival has a lot to offer: Kraftwerk, Disclosure, Bonobo, James Blake and unique b2b from 2ManyDJs and Tiga are all billed on the line-up, with many of these taking place on the main stage.

The first sunset over the main stage aptly welcomes James Blake, who serenades the audience with stripped-down piano versions of his sentimental tracks, but he also raises the mood by bringing the BPM close to 140 for some of the dance-ready anthems. The musician plays several of his famous tunes including ‘Mile High’, ‘Voyeur’ and ‘Love Me in Whatever Way’, and the sound quality within the bowl of the main stage is phenomenal, as every sound travels down and permeates the crowd, so that every attendee so that they can feel it in their core. Blake finishes his set with a stripped-down piano rendition of Frank Ocean’s ‘Godspeed’, which he released a cover of in 2020. “Wishing you godspeed, glory. There will be mountains you won't move,” sings the audience as they sway in unison to Blake’s wistful voice. His set, which combined the acoustic with the electronic, leaves many fans feeling emotional yet ready for a dance - as he showed that music can make you feel a plethora of emotions within a short space of time. 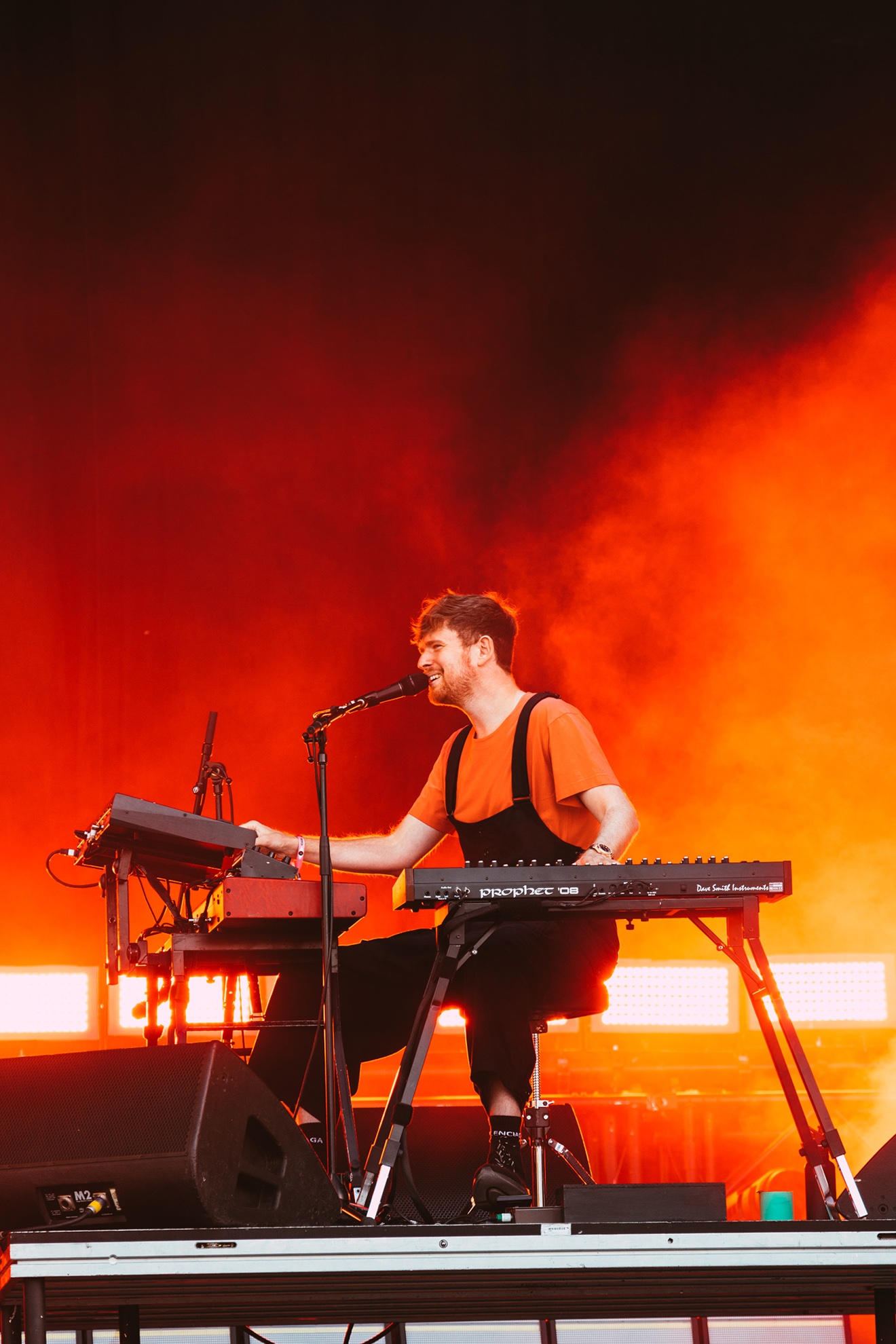 Electronic music pioneers Kraftwerk warm up the crowd on The Colina stage as they stand like four austere statues dressed in geometric matching uniforms. Audience members are given 3D glasses upon arrival to enjoy the striking 3D visuals accompanying the set, with funky imagery popping out toward them spanning everything from humanoid figures to space satellites. They play out the frantic cries and snappy synths from the 1983 hit song 'Tour de France’, and also play favourites such as ‘Airwaves’ and ‘Music Non Stop’. “My dad told me to go and see Kraftwerk, he used to be a really big fan of them!” laughs one girl in her early twenties from the UK. She explains that when she told her family about the festival she was attending in Lisbon, they were most impressed by Kraftwerk on the line-up, with some jealously wishing they were also able to attend.

Later at the main MEO stage, bass-fuelled lulls can be heard coming from the speakers as The Chemical Brothers start their captivating set with the lush vocals of ‘Come With Us’. At this point, the ravers start descending into the concaved stage and dance throughout the entire set. The duo are on the stage as blazing lights shine into the audience, making those dancing along feel as if they are one with the music. Trippy visuals accompany the music on the big screen, adding to the layer of neon in the air created by the stage’s spectacle. The duo play some of their most iconic tracks, including ‘Hey Boy Hey Girl’, ‘Swoon’, and ‘Song to the Siren / C-H-E-M-I-C-A-L’ — each of which gets a strong reaction from the audience and gets people moving their bodies for one of the last hurrahs of the summer. 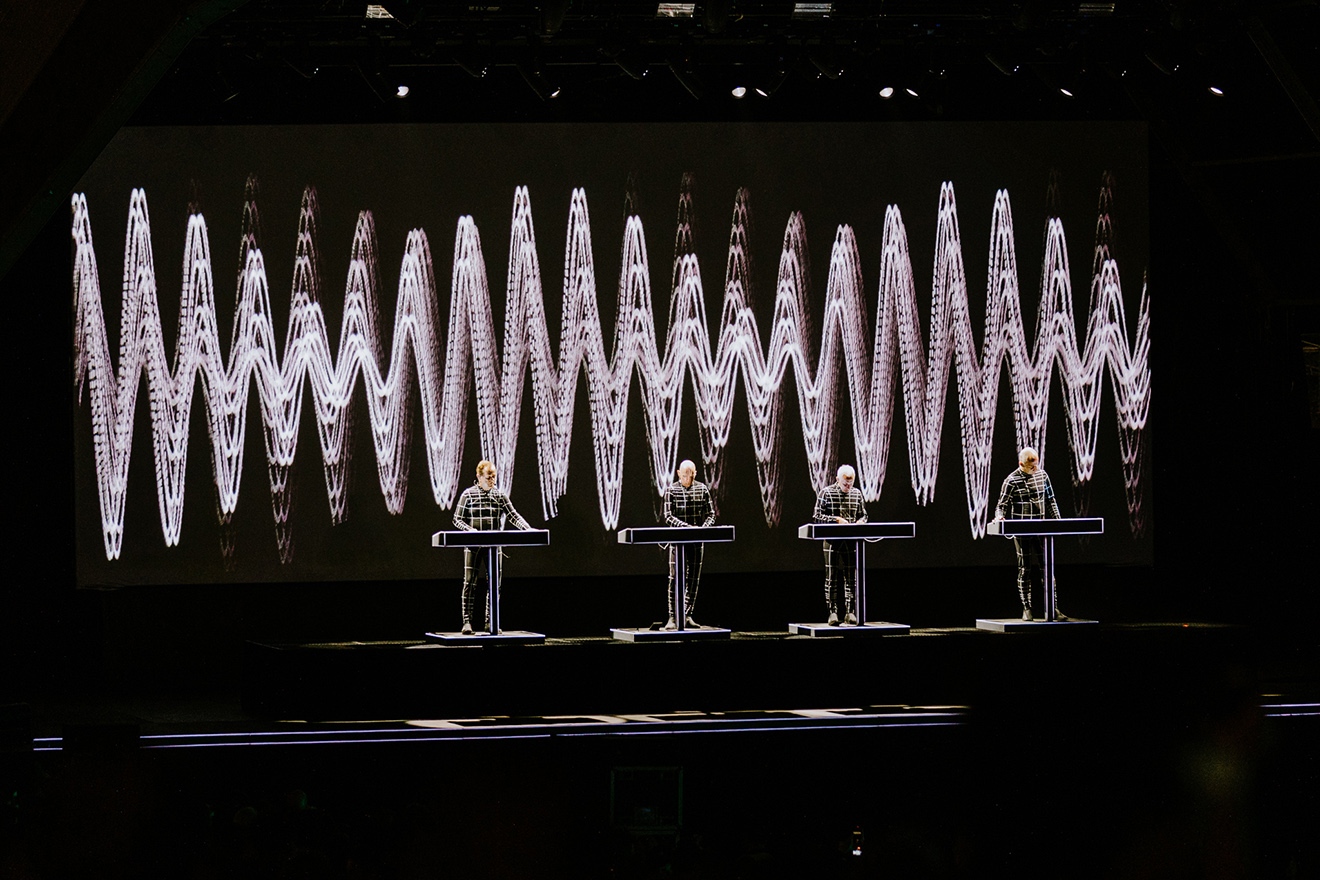 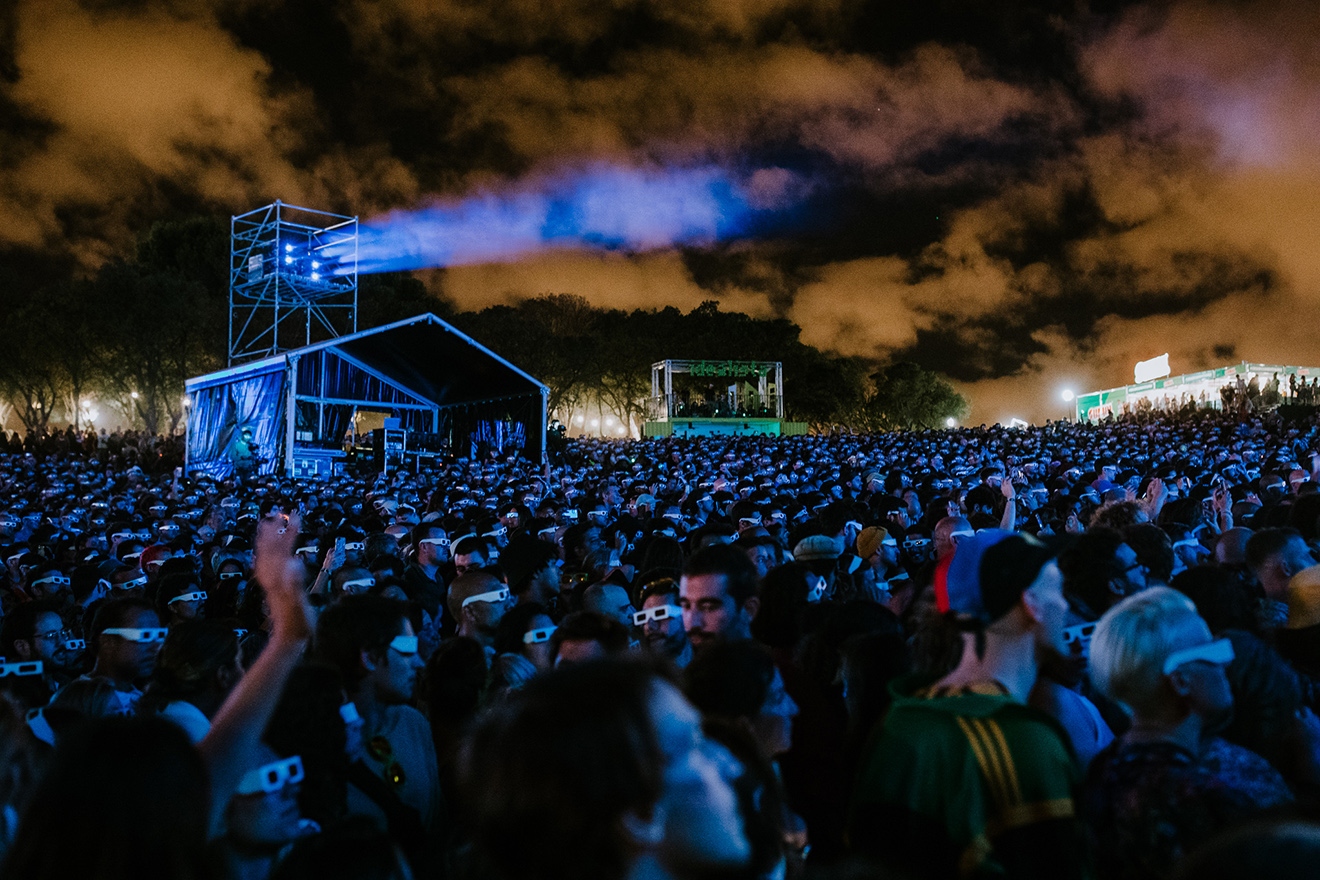 After midnight, the music gets even ravier and the mood gets naughtier. By this point, some attendees have already started to file out and make their way home - but many more are eager to continue the night. Disclosure's set guides revellers through a slew of great tracks in the early hours of the morning as thundering basslines echo across the park and revellers let loose during what may be the final summer headline show for many of them. The pair headline the main MEO stage and pack out the entirety of the bowl in which the stage is situated, with many fans tripping over down the hill as they gleefully run towards the stage. The crowd’s faces are painted with a spectacle of colourful lights, as people embrace, dance, and sing along to tracks such as ‘White Noise’, ‘Latch’ and ‘Waterfall’. The duo thank the audience for their love and support; “Portugal’s one of our favourite places to be!” they say. “We feel so honoured to share this moment with you all.”

Over on the Colina stage, Bonobo’s 1:AM set is enchanting, attesting to his position as a great musician of the modern age, combining live vocals and electronics with orchestral instrumentals. The electronic maestro takes the audience on a journey, playing cuts such as ‘Counterpart’, ‘We Could Forever’, ‘Otomo’, and ‘Kerala’.

Electronic music aside, the festival’s line-up has something for fans of poppier sounds that maintain an innovative edge - as artists and bands such as Peaches, Nick Cave and The Bad Seeds, Arctic Monkeys, Chet Faker and Róisín Murphy all feature on the line-up. 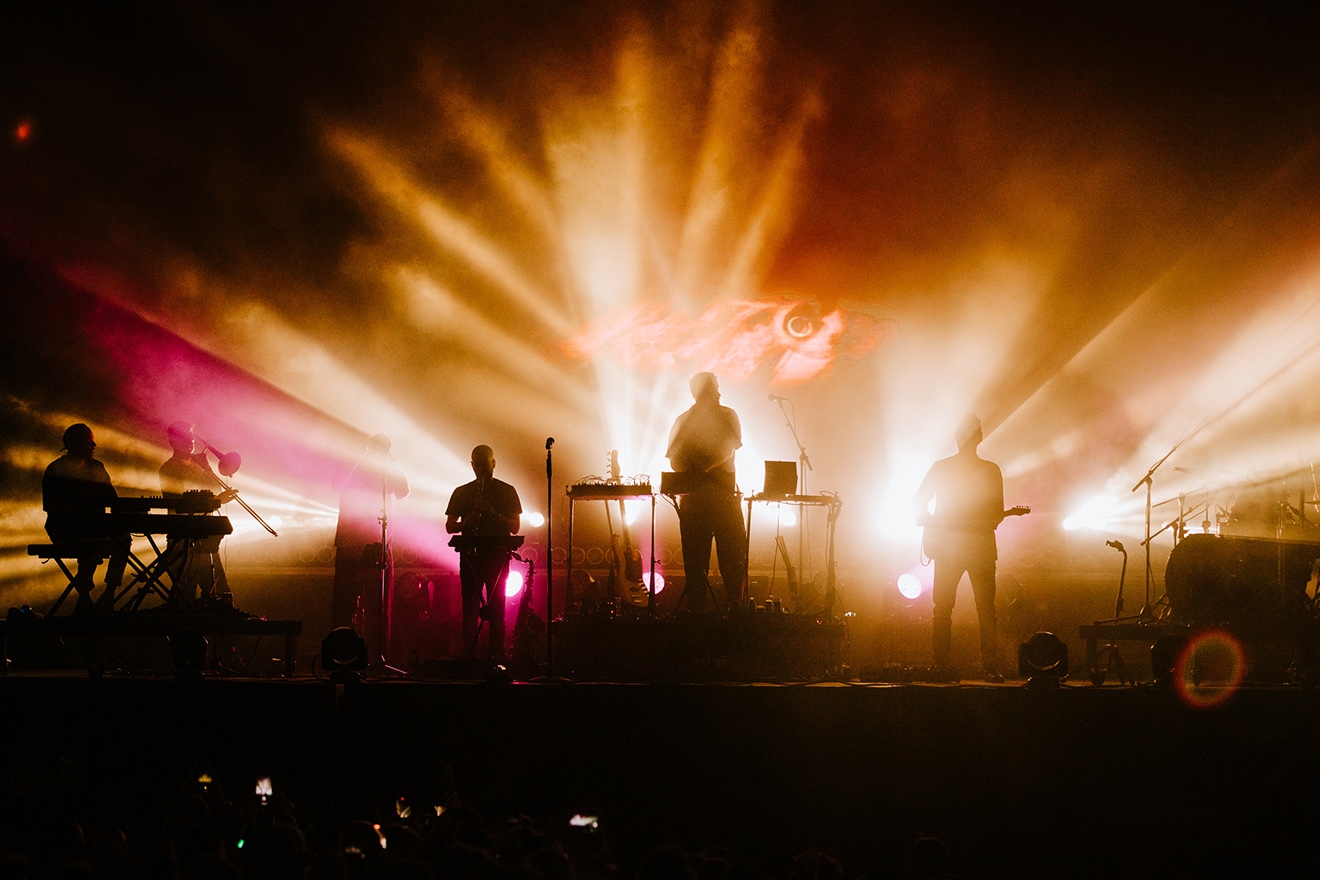 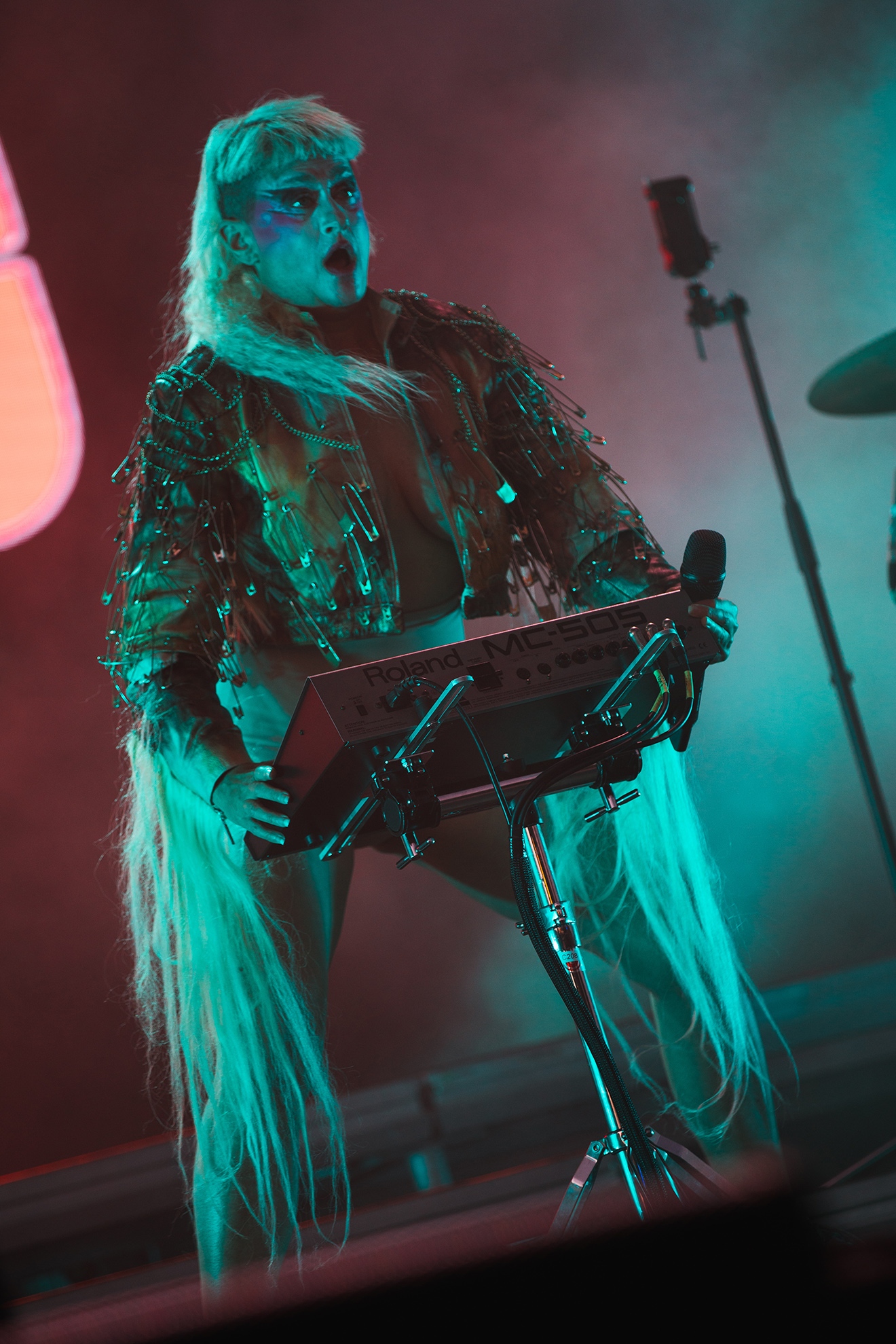 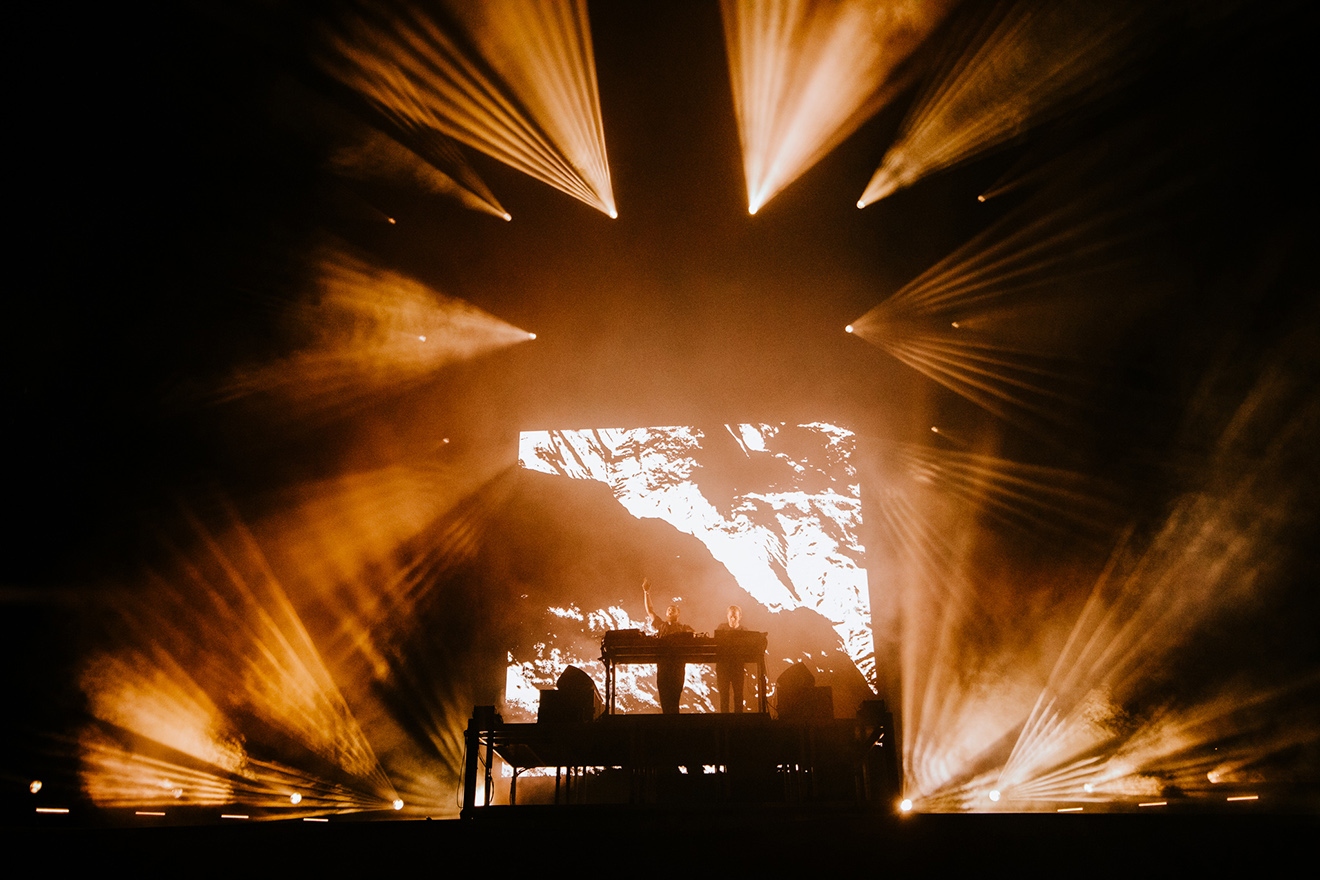 “This is the last show of our tour this summer!” exclaimed electro-punk artist Peaches. Her queer, sex-positive set was filled with tits, political messaging and live synths. The set features several outfit changes, and Peaches receives a roaring cheer as she parades around the stage wearing a leotard that says “thank god for abortion”. Soon topless, the musician delivers many of her iconic tracks including ‘Rock Show’ and the popular song ‘Fuck The Pain Away’.

Róisín Murphy’s vibrant set proves that she is here for the girls and the queers. Sporting multiple outfit changes, including a magnificent purple, fitted suit and a neon pink lion’s mane - the Irish underground pop musician dazzles audiences with her unbridled, raucous energy that radiates an audacious attitude to all those who are watching her. “I want to be her!” exclaims one girl, who is swaying with her group of friends as they link arm in arm and take in the spirit of Murphy. The star has complete control of the crowd and has everyone dancing along with her. She performs hit tracks that span across her career, both as a solo artist and while part of Sheffield-based Moloko, including 'The Time Is Now' and 'Familiar Feeling'. Each track is mixed seamlessly into another with the rings of synths acting as the transportation which takes listeners from one mood to another. “She has such big dick energy!” jokes one girl from Ireland with her friends. “Big dick energy is exactly what it is,” I say in response. We laugh, before humming along to her Moloko hit continuing to “sing it back” to her. 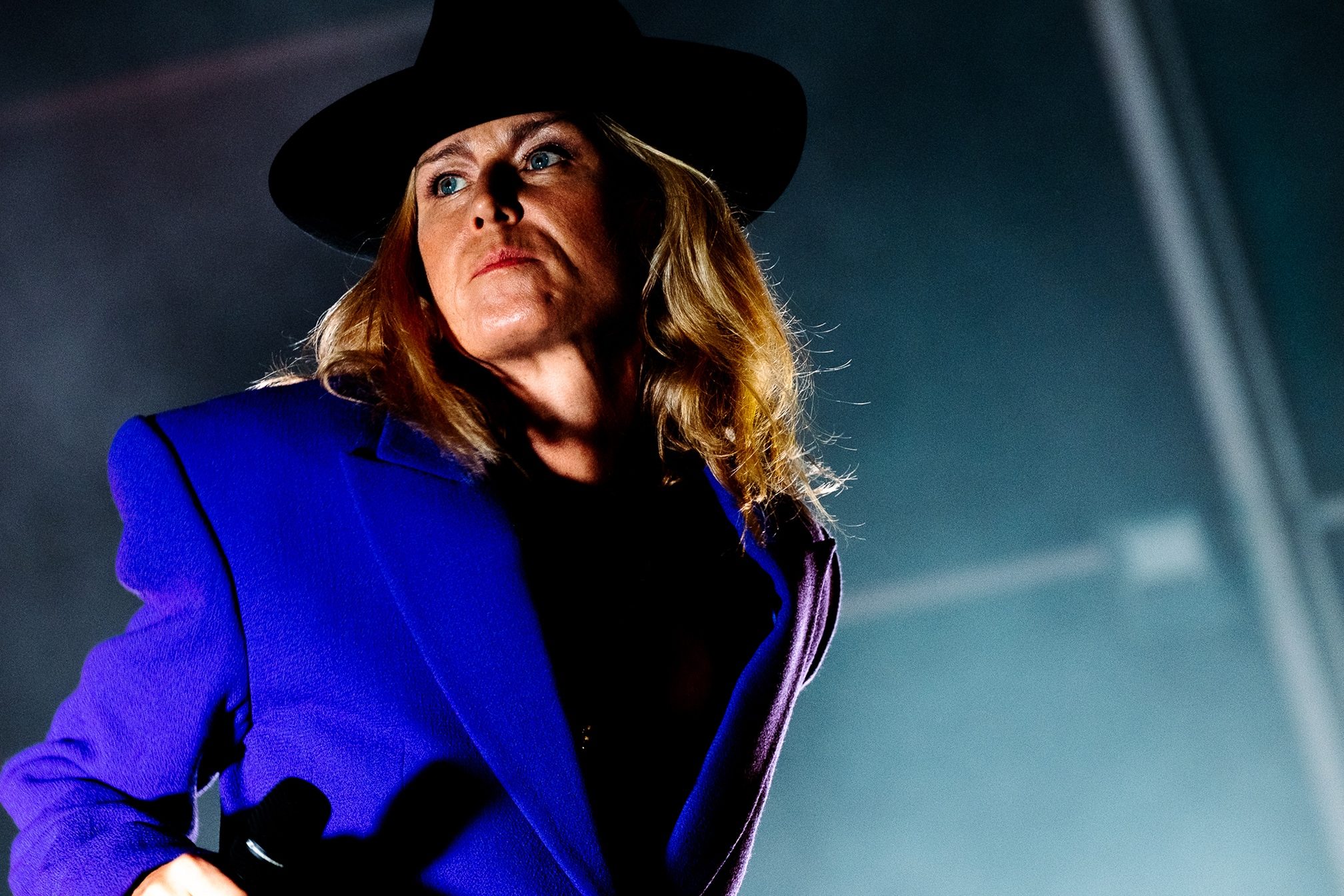 However, despite there being so many internationally acclaimed and locally championed names across underground genres present at such a small and new festival, there was a disappointing lack of gender and ethnic diversity in the line-up. While there were some non-male names represented from the alternative scene, it would be great to see more non-male DJs and electronic acts billed too at future editions of MEO Kalorama. There was also a significant disparity in white to non-white musicians performers at the festival, both electronically and beyond. As a new festival, MEO Kalorama could set an example for other major festivals by showcasing that there is space to platform all talent across these genres, especially as communities of marginalised genders, sexualities and races are the pioneers of underground and alternative genres.

No first edition of any festival comes without technical flaws, and sadly the first day of MEO Kalorama was tainted by overarching sound issues that cut a much anticipated b2b DJ set from 2ManyDJs and Tiga — something that electronic and techno fans dotted throughout the festival were keen to unite for at the main MEO stage. However, technical issues and a clash with Kraftwerk’s mesmerising set on the Colina Stage left the main stage without adequate power, completely cutting off the scheduled b2b 15 minutes into the set. 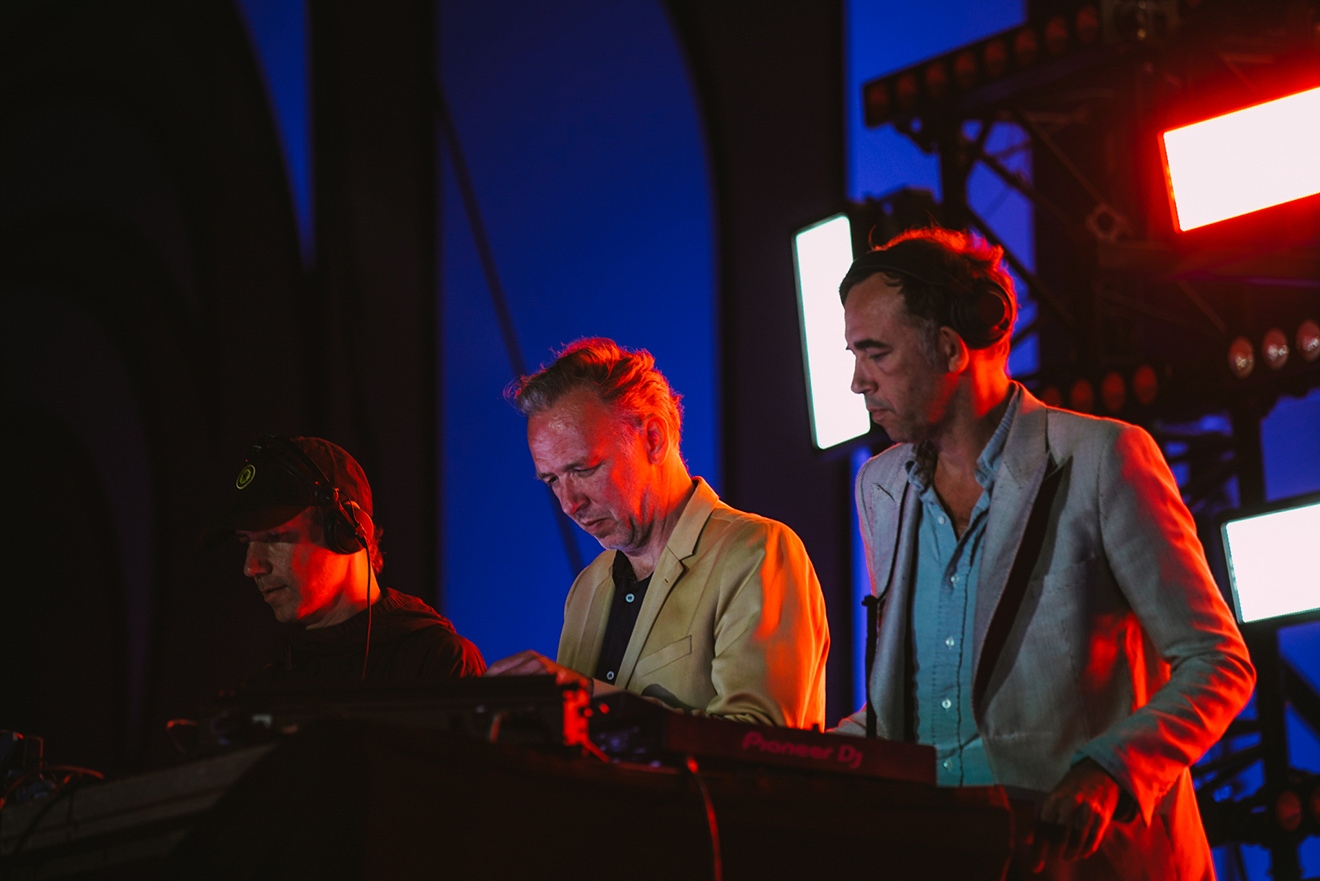 Nevertheless, the team behind Kalorama were incredibly receptive to all feedback and acted promptly to all issues as the weekend went on - keeping revellers satisfied and without further complaints. After 2ManyDJs and Tiga’s issues, the team fixed all of the sound systems across stages to ensure that the next day’s event wouldn’t run into the same issue. Bonobo’s set at Colina and Disclosure’s MEO main stage performances both ran seamlessly, and the sound was engineered to each act perfectly.

Similarly after feedback from some attendees about a lack of enough toilets on site, the issue was promptly fixed. This hospitality, care, and passion towards attendees sets MEO Kalorama apart from other festivals and should be seen as an example for others to follow in the 2023 season.

Given the size of the festival, MEO Kalorama attendees should count themselves lucky for being able to watch so many world-renowned artists in an intimate setting such as this. By the end of the weekend, other faces in the crowd become familiar and all attendees feel a strong sense of community and togetherness — a feeling that is becoming increasingly lost as festivals become more commercialised and oversold. For its first edition, MEO Kalorama has done a good job, and their team deserve praise for the way that feedback was handled. An intimate, yet impressive affair, this festival is already setting an example of the way that future festivals may operate.