Are you a scratch-DJ-in-training? Or maybe you just fancy getting slippy on the decks to the sound of Grandmaster Flash? Whatever your pipeline into turntablism, there’s plenty of equipment out there for any level of scratch proficiency - and none more so than Pioneer DJ’s latest models of 2-channel mixer.

While it's proved a difficult time to find DJ gear with shortages across the industry, these pieces from Pioneer DJ are some of the few items available right now. The newest announced piece of equipment - the DJM-S5 - as well as the S7 and S11 each cater to the scratch DJ of all levels and come jam-packed with new features and additions and the latest version of Serato DJ Pro (and rekordbox for the S7 & S11). And, the best part: you don’t have to break the bank to get your fix.

While the DJM-S11 and DJM-S7 offer similar features with a focus on turntablism and new effects, the DJM-S5 boasts a new staunch red shine and takes on a plethora of new and exciting additions. Take a peek at Pioneer DJ's latest scratch mixers below. 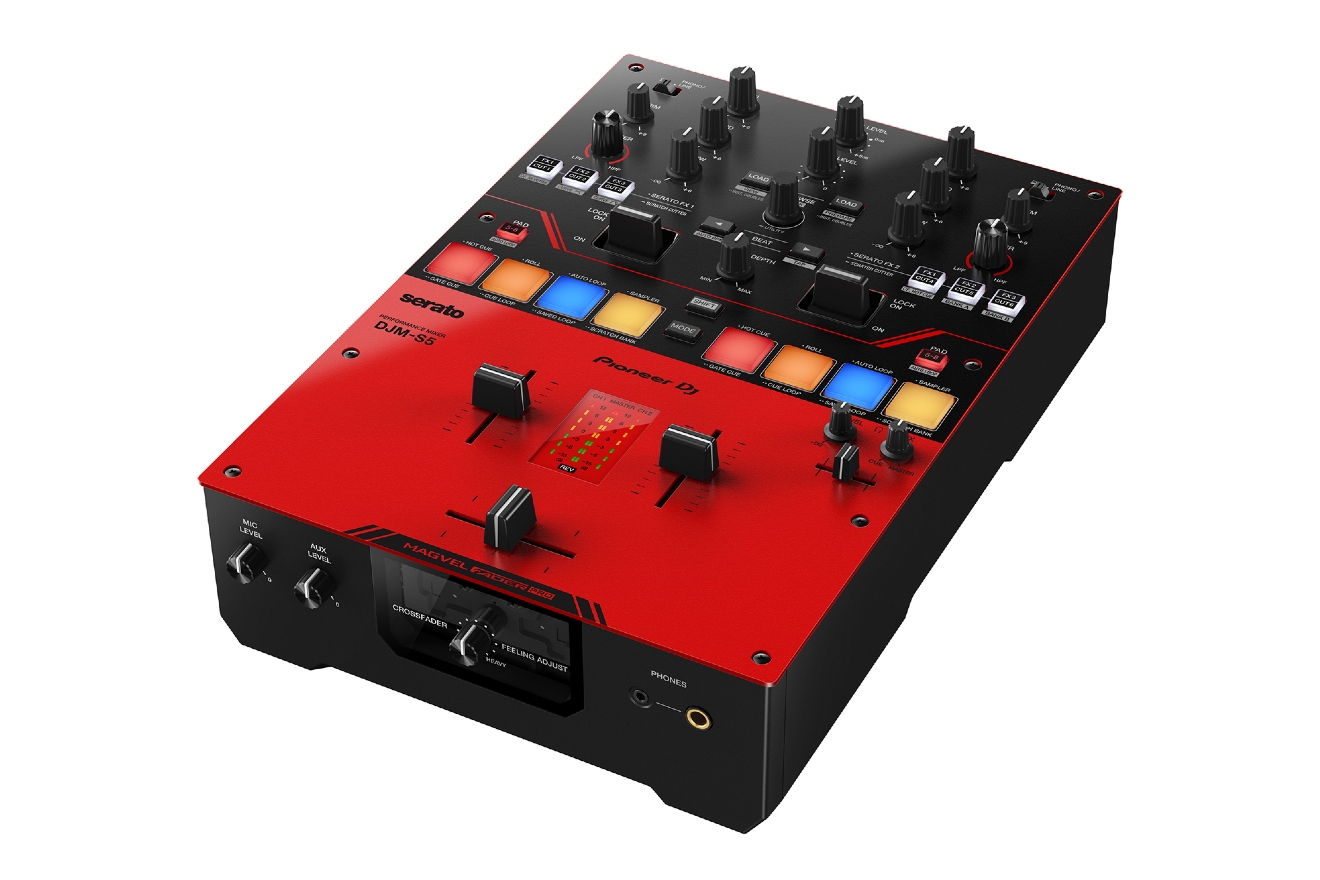 First up: Pioneer DJ's brand new 2-channel mixer, lovingly presented as ‘DJM-S5: Passion For Scratching’. Made with open format, hip-hop, and scratch DJs in mind, the S5’s Magvel Fader Pro crossfader brings back Feeling Adjust allowing you to tweak the weight to get the right level of resistance.

With two effects levers, the S5 allows control of up to 57 effects in Serato Pro DJ with the same flagship knobs as 2020's DJM-S11. Elsewhere, the new model’s performance pads flaunt 13 pad modes including Sampler and Hot Cue. Samples can be triggered on each deck, and saved between two banks for easy access. For first-time scratchers, brand new feature Scratch Cutter allows you to learn new scratches and choose between six cutting patterns so you can concentrate on timing and control.

On top of all of that, the S5 is the first mixer from Pioneer DJ which can be powered via USB connection to your PC. The DJM-S5 also acts as a standalone mixer, so you can hook it up to a range of outputs including analog vinyl records.

It’s not just new effects, either - the DJM-S5 comes baring a brand new glossy red sheen and adds 'grab handles' making the mixer portable while its weight remains light and compact, perfect for gigging or getting on the road. This intuitive mixer will only set you back $799 (£749), find it here. 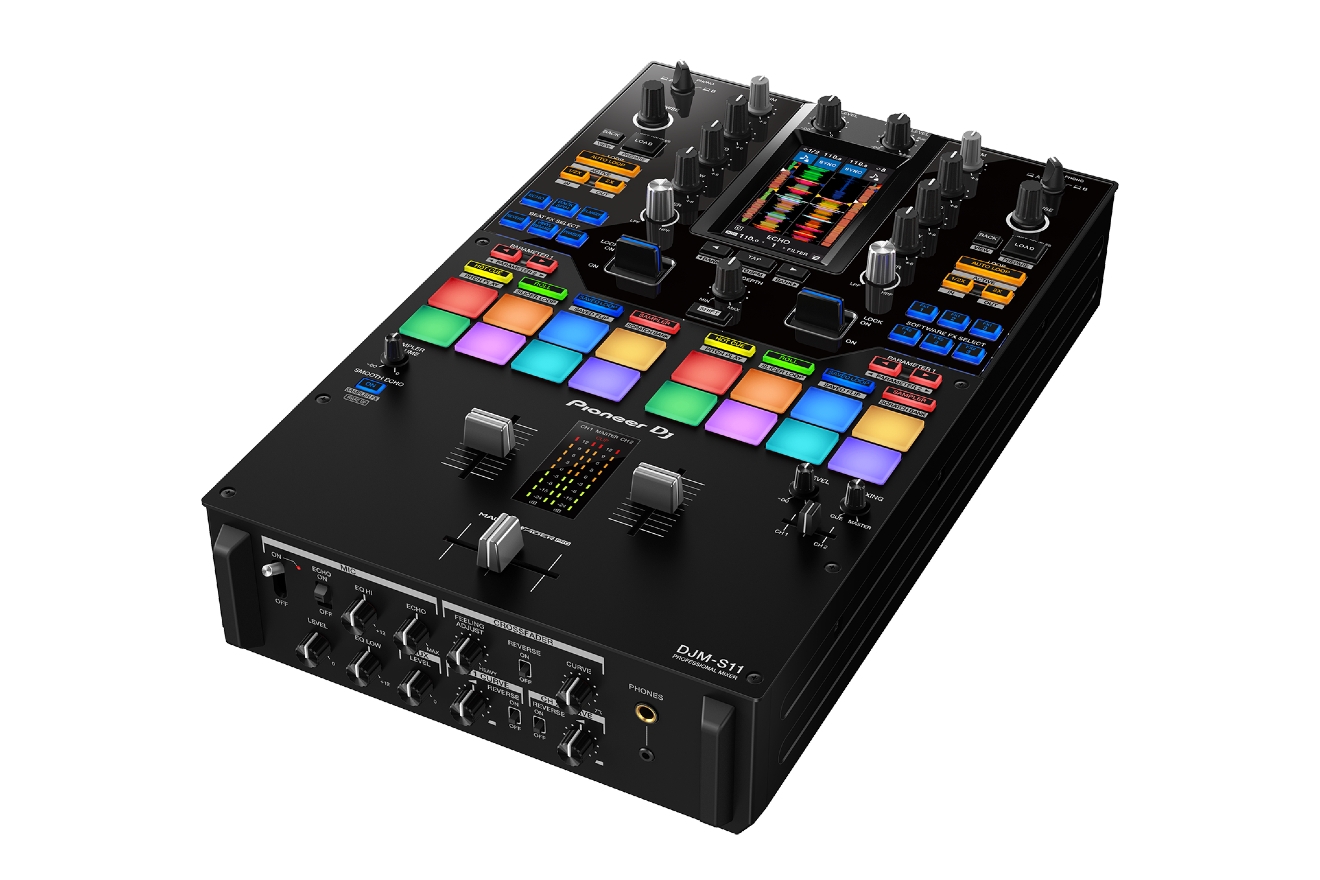 Pioneer DJ's DJM-S11 is another fairly new addition to the S Series landing in late 2020 as the top of the range. Marked at £1,809/$1,999, this mixer is a little pricier than its S Series counterparts but packs a punch when in action. Made for the more practised scratch DJ, the S-11 comes with a range of never-before-seen features including a 4.3-inch customisable touch screen with a high frame rate, perfect for the frantic scratchers and open format DJs. The touch screen also allows for waveform and playback position viewing.

Said to be an industry first, the S11’s Smooth Echo function allows you to trigger the echo automatically with a fader or pad of your choice. This feature, Pioneer DJ claim, has never been seen on any other mixer before.

Read this next: Pioneer DJ brings it all together with the new all-in-one XDJ-RX3

In a ‘world first’, the S11 also boasts Deck 3/4 Control allowing you to play up to four tracks at any time and creative live mash-ups with a selection of your choosing. The four-deck mixer includes an additional range of EQs, pitch bend, and more, making it the perfect mixer to perform a crossover blend of tracks.

Elsewhere, the S11 hosts a whole new range of effects - 22 built-in, to be exact - including Pioneer DJ's new Beat FX. A Scratch Bank can also be accessed via a new pad mode, allowing you to instantly load scratch samples from four different banks.

The S11 also landed alongside a special edition DJM-S11-SE, taking on the style elements of Pioneer DJ’s classic 2004-released DJM-909 with the same high-quality audio as the S11 - and all the trimmings. Find out more about it here. 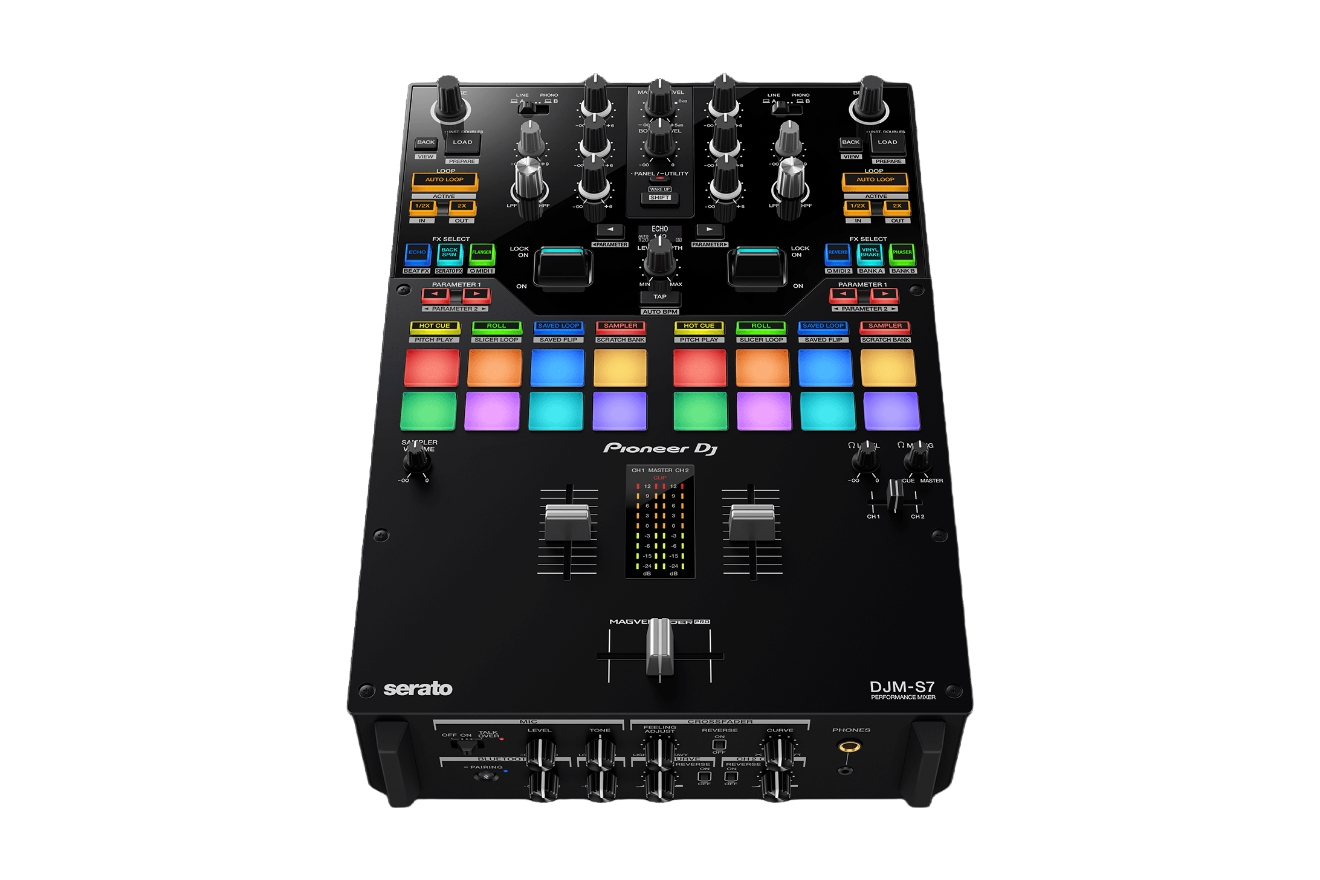 The DJM-S7 is built on precision and masterful turntablism. Landing just a year after the S11, this scratch-focused mixer, much like the S5 and S11, flaunts the Magvel Fader Pro, built-in USB hub, and Scratch Bank. This time, the DJM-S7 is scaled back to simplicity if you're looking for something with fewer bells and whistles.

There are fewer FX buttons here than the S11, but you can use these to access different programmable modes such as Loop MIDI allowing the use of effect levers to control functions in your DJ software such as beat cycles. With added Bluetooth input, you can add music wirelessly from your phone onto the mixer to drop sounds and samples straight into your set.

By activating Combo Pad Mode in the free-to-use software provided by Pioneer DJ, Serato DJ Pro, you can use two different pad modes at the same time meaning you won’t have to change modes but can do so fluidly with the chance to combine more features.

This mixer sits in a mid-price range of £1,339 and cements itself as a solid, efficient mixer for those looking to hone their scratching skills. Find out more about it here.