Ever since throwing its very first party in October 2006 – a knees-up in Manchester’s now sadly closed former Boddington's Brewery featuring John Digweed, Steve Bug and Tania Vulcano – The Warehouse Project has developed into a clubbing destination, enlightening a new generation of ravers on the rich dance heritage of its Northern English home. In the 16 years since, WHP has hosted some of the country’s biggest parties, with sets from some of the world’s best DJs and continues to be at forefront of UK electronic music events and innovation.

Read this next: Watch new documentary 'Blueprint: The Warehouse Project'

Now for the first time, The Warehouse Project is setting its sites abroad — with its first international event, a weekend festival in the Dutch city of Rotterdam. Taking place across the May bank holiday weekend between April 28-April 30, the festival will take place in the Rotterdamsche Droogdok Maatschappij (RDM), a large former shipyard set in the middle of the city’s port area.

We sat down to talk with Sam Kandel, co-founder of the iconic party series to find out what’s in store. 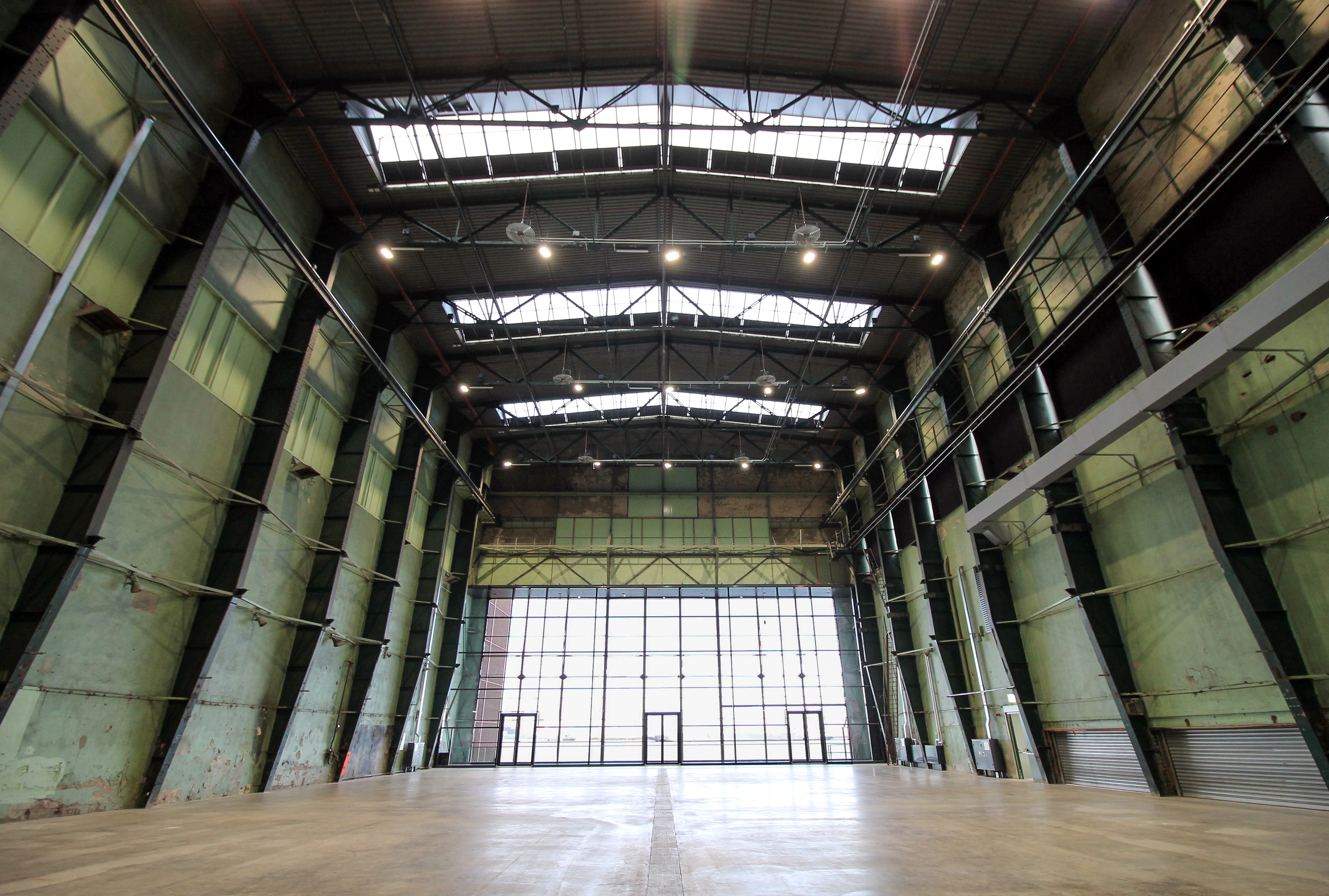 What made you want to do an international festival?

Since we started the Warehouse Project in 2006, we always wondered what the international opportunities were. Throughout that time we’ve kept an eye out for anything that looks like the right thing, and it’s actually taken us until now to find something that’s right.

How long have you been working on this Rotterdam idea for?

Pre-COVID we went over and had a look at Rotterdam and various venues [there]. We really liked the city — we thought the city had a really good synergy with Manchester. Whether it’s the industrial history of [Rotterdam] or the history of dance culture, there was definitely a connection there. Everyone’s been to London, everyone’s been to Amsterdam — there are a lot of people in the UK who have been to Amsterdam, but never really considered Rotterdam. We think it’s a great destination for everyone that is so accessible.

The history of club culture in the Netherlands is based not just in Amsterdam but Rotterdam as well — there’s a huge heritage for techno. Everyone knows about Manchester’s place in the history books as well, so we’ve got nothing to teach Rotterdam about raving, but nonetheless we think it could be a good backdrop for The Warehouse Project.

What is the venue like, and why do you think it fits with what The Warehouse Project is about?

RDM is a really good venue — it’s not used extensively for these kinds of events. It’s right at the port, and there’s this huge window that overlooks the whole of the city. We think that’s quite poetic. A large proportion of the audience will never have been to Rotterdam before, so the entire time that they’re in this WHP Rotterdam event they can actually look out over the water at the city.

The venue itself is absolutely perfect. We’re obviously very lucky to have the Mayfield [Depot] in Manchester, but [RDM] is a great venue — if that had been lying around in Manchester we would have been interested in getting in there.

Read this next: The Warehouse Project is one of the world's best clubbing experiences — and these pictures prove it

What should loyal WHP fans expect from the festival?

It’s a change in the format compared to a typical WHP event. It’s a weekender to start with — we’ve never done a WHP event in Manchester like that. Our format in Manchester is different in that you have these 25-30 events and they are all completely unique. But this is more a coherent program that is spread across three days, so this is a break from the norm for us. We’re really excited about it — we’re going to be adding loads of daytime activity, there’s going to be some afterparties that we’re still going to add in.

We will give it a real Rotterdam flavour as well so it doesn’t just feel like we’re going to be setting up camp in this city and just doing it how we would do normally. We want to give everyone the opportunity to explore the city — for it to be a unique experience for everyone. But I can’t talk about exactly what it’s going to be like, because we’ve not done it before, it’s going to be a new experience for us as well. 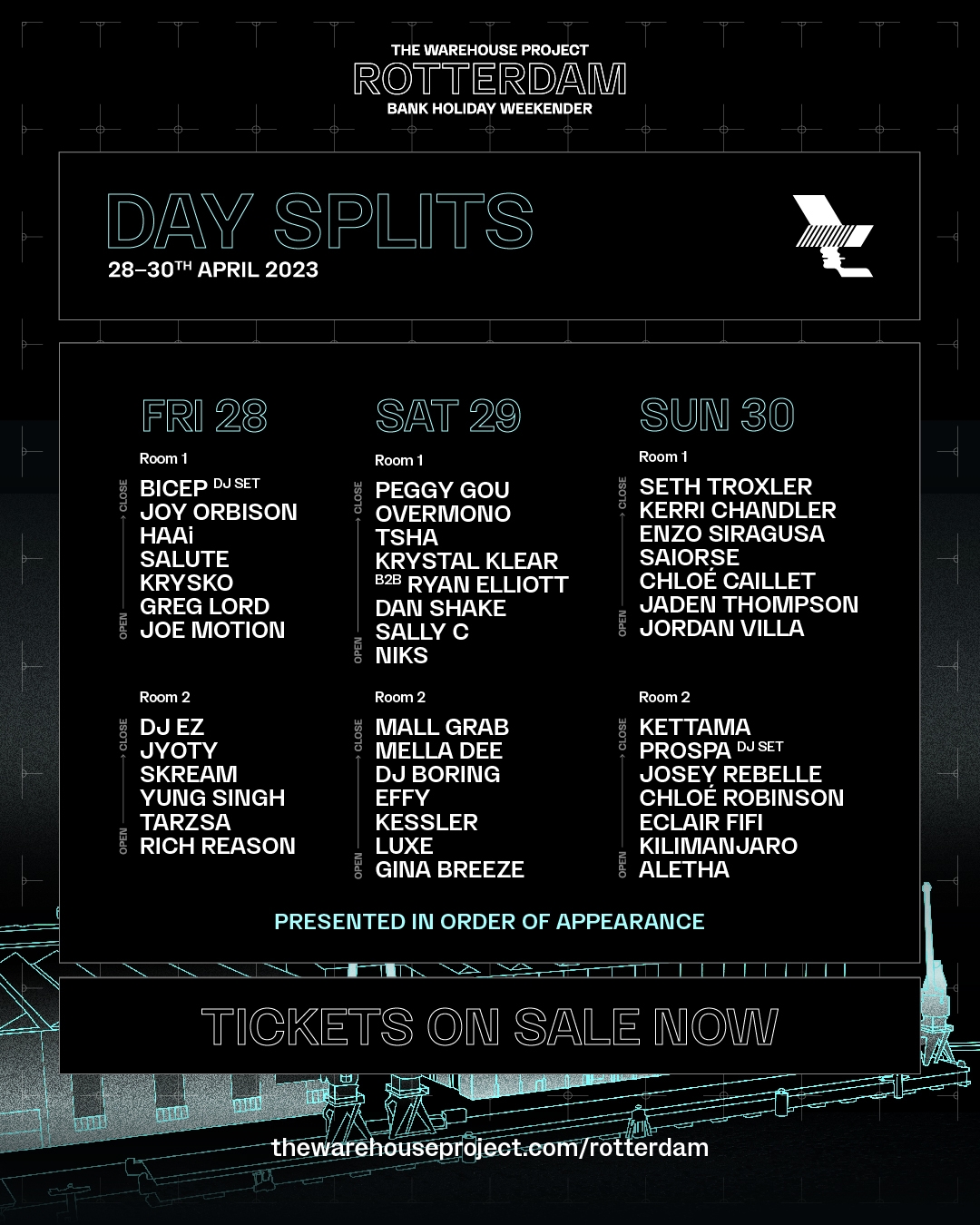 Can you tell me a bit about the thought process that’s gone into the line-up?

We started with some of those artists who have been at the core of what we’ve been doing for a number of years. Like Skream and Bicep, those artists we have a longstanding history with them — we’re pleased with how it’s come together. We think the important thing doing a weekend in this format is that it feels a coherent whole as well. We couldn’t go everywhere that WHP would normally go in a season because that would be too much ground to cover

Who should fans be most excited to see in the new setting?

I’m looking forward to seeing everyone. I’m always excited to see the first acts come on, when all the music starts the night and there’s all that anticipation for the event. That’s one of my my favourite parts of the night actually.

Read this next: The Warehouse Project unveils full 2022 line-up

Can you tell me a bit about the side shows and afterparties?

We haven’t fully fleshed out all the side shows yet. We want to get some of the local Rotterdam crews involved in that, as well as an opportunity for some of the artists to play a second set while they’re out there. Alongside the RDM there are some fantastic venues in Rotterdam, so it would be great to provide the opportunity for the audience to explore those places as well so it’s not just that one RDM warehouse venue, so they get a real flavour of Rotterdam club culture while they’re there.

Tickets for The Warehouse Project's Bank Holiday Weekender in Rotterdam are on sale now, for information and tickets head to thewarehouseproject.com/rotterdam.